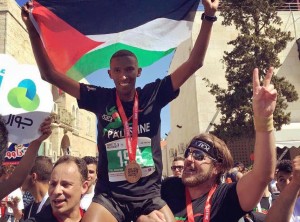 BDS South Africa joins other NGOs and South Africans in congratulating South African runner Mervin Steenkamp for winning this year’s Palestine Marathon. The run, held annually since 2012, takes place in the Holy Town of Bethlehem in Palestine with over 4000 runners. The marathon has an over 45 percent female participation with runners and teams from across the world including from northern Ireland, Denmark, USA and France.

The symbolic event is a 42km (26-mile) sports event in protest against’s Israeli restrictions on Palestinian movement. It kicks off at the Church of the Nativity in the old area of Bethlehem and runs the length of the city, passing local Palestinian stores selling wooden christian crosses and Palestinian keffiyehs. The route also includes running through two Palestinian refugee camps and along Israel’s 8m high Apartheid wall. Palestinians have explained how participation in the marathon is a non-violent demonstration and a way to show that “we are here, and this is our land, and we have right to move”.

This year’s winner, Mervin Steenkamp, of Cape Town, finished the race in 2:35:36. Steenkamp ran in support of the Palestinian Children’s Relief Fund (PCRF), a group raising money for paediatric healthcare in Palestine.

The UN Coordinator for Humanitarian Aid and Development Activities, Robert Piper, issued a statement in support of the race saying: “As many of us join this celebrity event, we remain acutely aware of the many barriers to freedom of movement faced by Palestinians every day. I am sorry to hear that Gazan runners, including last year’s Marathon winner Nader al Masri, have not been granted permit by the Israeli authorities to participate in today’s event”. Click here to read the rest of UN agency’s statement supporting the Palestine Marathon.

Over 750 applicants from the Palestinian Gaza Strip applied to the Israeli regime to travel out of the narrow seaside ghetto and through Israel to participate in Bethlehem located in the Palestinian West Bank. Unfortunately, all travel permits for Palestinians from Gaza were rejected by the Israeli government.

According to the Washington Post, a 15 year old Palestinian girl, Inas Nofal, from Maghazi Refugee Camp in Gaza, who trained for the 10-kilometer run, received just 24 hours’ notice that she could not compete: “Nofal was devastated. She cried and questioned what had she done to be rejected, her coach said. Nofal had aspired to become the first female from Gaza to win a medal in Bethlehem, but instead became an anecdote for the race’s message — a Palestinian who sought to move from point A to point B, but was limited because of policy in the region.”

The local Cape Town Chapter of the PCRF will be holding a press conference on Wednesday 6th April at 1pm at Cape Town International Airport Media Centre to welcome SA runner and windner Mervin Steenkamp. All members of the media are invited to cover this celebratory press conference, engage with Steenkamp and for a photo opportunity.